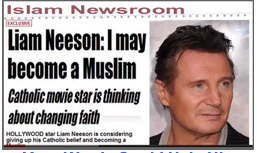 Brothers and sisters, listen carefully. I shall say this only 763 times on numerous sites dotted around the web. We have a new target in our sites. And this one is a biggie. If we can hook this fella, we can forget Tony Blair's  sister-in-law, Jack Straw's son,  Yvonne Ridley and even Cat Stevens. This will be global! - it's Qui-Gon Jinn! (come on, you know...Star Wars?!), ok...Oskar Schindler! er..(ironically) Aslan! Yes, that's right - the "smouldering" Irish born Catholic mega star, 69th in Empire magazine's list (1997) of the greatest movie stars of all time  - none other than Liam Neeson! Yes, brother Liam has been touched by the call to prayer and has even been reported as reading the Qur'an! As reverts go, this is Premiership, no... this is Champions League!
Please message brother Liam and tell him why Islam is the one true faith and how he'll have a great time with the brothers an' sisters. (I don't need to remind you all, of course, to keep certain things to yourselves, do I?...Namely: there's no need to tell him about what the Prophet ordered we should do to him should he change his mind after joining our happy throng. I also think we won't mention what we think about gays - Hollywood being Hollywood and all that. Oh, and perhaps keep quiet about that business of turning Jews into pigs and apes - Hollywood being Hollywood and all that.


Oh soo very satirical, Spinoza. You don't really think Islam is so desperate for celebrity converts they'd do something as crass as that, do you?


He heard the adhan in Turkey - He is reading Quran - He has been listening to the dawah.
Now it is time to really take it up to another level.
Let's get serious Liam Neeson. You are considering swapping his Catholic faith for Islam, OK?
Please read what we are all saying to you (bottom of page) and then tell us what you think (inshallah - God Willing)...
I'm afraid so...Do please pop along to Islamnewsroom.com to see the latest twitter campaign.
Posted by Spinoza at 1:53 PM