It will come as no surprise, but is no less sickening for all that... we are beginning to see the inevitable.
We saw it, after all, with 9/11. We saw it with 7/7.
My convert friend refuses to accept either atrocity was carried out by those following his faith. It was western governments, security forces and of course....the JEWS!
There are claims now emerging that Woolwich was a false flag operation.
On the anti-Semite site run by bonkers Canadian professor Michel Chossudovsky called rather grandly Global Research we see this:

Chossudovsky, by the way, has been described in various quarters as one of "Canada's nuttiest professors, those whose absurdity stands head and shoulders above their colleagues" link

The article has this to say about the recent events. Look away now if you are easily offended by rank stupidity.

These type incidents automatically raise questions. Answers are needed before jumping to conclusions. The timing of Wednesday’s killing is very suspicious.
COBRA refers to the room where committee members meet – Cabinet Office Briefing Room A. A terrorist alert was imposed. Heightened security steps were taken.
These measures don’t commonly follow street killings. It doesn’t matter how gruesome. Most incidents get scant coverage. Many go unnoticed.

“The gruesome scene of a decapitated actor with no police or paramedics at the scene and no blood,” he said.
The “offenders are shot by armed police who are in attendance in the background but the murder scene has not been secured!!”
Many awakened “to this amazing Shakespearean play that has unfolded in Woolwich, London where all the actors were so bad they would not even qualify for an interview as an extra in some third rate movie!! S)o much vivid violence and yet still no blood at the sceneâ€¦why?”“(B)ecause the actors had not had time to splash it around before they filmed the scene.”“(I)t was however added later as the picture (in his article) showsâ€¦the blood is only on the pavement and not on the road!!”“(D)o you think they attempted to copy the Boston Bombing but somehow did not get it right?””

The Guardian today carries an interesting aside to the deeply disturbing story of the systematic grooming and abuse of vulnerable young girls in the town.

Across the Cowley Road the leaders of the Central Oxford mosque are equally horrified that men who attended prayers inside its doors – men who had wives and children and were well known in the community – could have been responsible.

In a previous post I suggested that religion rarely makes bad people do good things but can and does make good people do bad things. I took as my example of the latter the Boston bombers, the younger of whom (Dzhokhar Tsarnaev) had received a $2,500 scholarship from the city of Cambridge, Mass. and was hoping to become a dentist.

Now we have an horrific example of how religion fails to make bad people do good things or,more pertinently in this case, doesn't stop bad people doing some of the most evil things imaginable. 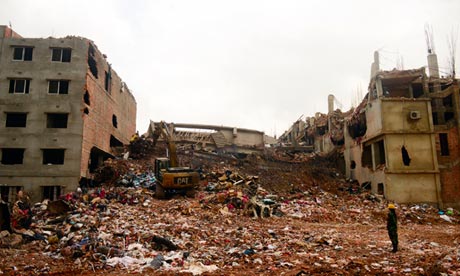 Allah must be delighted with the news emerging from Bangladesh at the moment.
We know that God (whether He be the one found in the Jewish Bible, the New Testament or the Qur'an) is obsessed, above all else, with being given due recognition by mankind for His creation. We also know (because He never let's us forget it) that He is a jealous God; there is nothing worse in His book(s) than worshiping other gods, or shirk as it is known in Islam.
Now, in any country not labouring under the yoke of religious mania, the news that 585 of their fellow citizens had perished when a factory collapsed would have been greeted with outrage by the inhabitants. Especially when it became clear the reason for the collapse was the greed of the owners and the shameful turning of a million blind eyes belonging to westerners more interested in buying cheap jeans than in caring for the abused workforce who produced them.
And indeed there was outrage in Bangladesh the day after this appalling tragedy. There were street protests. There were howls of anguish and impassioned debate. Three people died and hundreds were injured.
But the poor deluded Bangladeshis chose not to come out on the streets in support of their fellow workers being abused by grasping bosses but - and I still find this difficult to believe even as I write - rather in support of a newly formed Islamist group demanding, inter alia, the death penalty for those who insult Islam.
If ever an illustration were needed of how religion warps the perspective of those whom it infects,  there it is in glowing red of the tyres set alight in the streets and the bestial howls of the crowd screaming: "One Point. One Demand: Atheists must be hanged!". If ever I need an answer to the question: Why are you running this blog -what do you have to fear from Islam or any religion? I shall simply ask in return why the pointless deaths of those factory workers was deemed less worthy of protest than the demands for the deaths of those who can't believe in the merciful god of Islam.