One of the many reasons why I find my friend's conversion to Islam so disturbing (apart from his refusal to condemn FGM, or to accept that homosexuality is a perfectly natural part of life or that the Qur'an doesn't, in fact, contain a host of scientific miracles...to name but a few) is his belief that Man was created in his present form by God and human evolution is wicked falsehood spread by ignorant scientists. That such beliefs are commonly held by uneducated Muslims is depressing enough, but that an educated, highly intelligent man, who considered studying medicine for a while, and who was fascinated by science before his conversion, should now hold such beliefs makes me despair. For he is not alone.
A 2007 study  found that only 8% of Egyptians, 11% of Malaysians, 14% of Pakistanis, 16% of Indonesians, and 22% of Turks agree that Darwin's theory is probably or most certainly true. 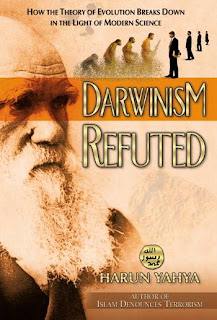 Now, from the outset I should make it clear that this is not, of course, a problem unique to Islam. Fundamentalist Christians are infamous in their belief in Creationism or its bastard offspring, Intelligent Design. According to the most recent Gallup poll, 46% of Americans believe that God created humans in their present form.
But what is clear is that it is adherence to a religion that so poisons people's minds that they choose to ignore the overwhelming evidence for human evolution. For as Jerry A. Coyne wrote in the introduction to his famous treatise, Why Evolution is True:


You can find religions without creationism, but you never find creationism without religion

For to deny that evolution is a true account of how Man arrived at his present form is to believe that just about every scientist in the world today is either stupid, or that they are involved in a coordinated conspiracy to both invent the indisputable evidence FOR evolution and to systematically cover up the evidence AGAINST it.

And whilst it is overwhelmingly the case that it is the under-educated who dismiss Darwin's theory in the West (twice as high a percentage of Americans with a high school education or less believe in creationism as do post-grads) and the better educated can and do carry on with their lives regardless, in Muslim majority countries it is the academics who have to tread carefully when discussing the origins of man lest they invoke the ire of the religious authorities.
Such an atmosphere is hardly conducive to free inquiry, intellectual rigour or scientific progress. But it is not just in those countries which are nominally Muslim where belief in evolution is becoming dangerous.
Usama Hasan, Imam at the Masjid-al-Tawhid mosque in Leyton and senior lecturer in business-formation systems at Middlesex University and a fellow of the Royal Astronomical Society had to resign from his mosque recently following death threats because he dared to teach about evolution (and women's rights). I'll say that again: he received death threats because he taught evolution...in Britain.

Anyone who maintains that Islam is a force for progress in the world might want to spend some time reflecting on the above and consider the following.
Taner Edis, the author of “An Illusion of Harmony: Science and Religion in Islam,” grew up in a Muslim household but is under no illusions about Islam's contribution to modern science:


Right now, if all Muslim scientists working in basic science vanished from the face of the earth, the rest of the scientific community would barely notice. There’s very little contribution coming from Muslim lands.

Objective data backs up Edis' view. In a study by the World Bank and Unesco of 20 member states of the Organization of the Islamic Conference it was found that these countries spent 0.34 percent of their gross domestic product on scientific research from 1996 to 2003, which was just one-seventh of the global average. Perhaps these countries are fearful that if they spent any more they might discover something that contradicted the "science" in the Qur'an. It certainly stops them producing much science. In 2005 another OIC study found that these countries produced 14, 500 scientific papers - that's 2,000 fewer than Harvard University managed on its own.
Of course Muslim countries have very specific problems to contend with - not all a product of Islam - but it is Islam that produces the biggest hurdle: the wedding of religion and state. Scientists who offend clerics have no state support to fall back on because in all likelihood, the state answers to the clerics as well. Science in Muslim countries must be seen to confirm the statements in the Qur'an or it is not welcome. This has led to a skewing of scientific research and the dismally tragic failure of Islamic states to contribute to Man's progress in the last hundred years.

Thus when people ask why I don't leave Muslims alone to believe what they want - my answer is that I'd be more then happy to, if they extended the same courtesy to those who don't share their beliefs. It's bad enough that poor Muslims are taught to deny scientific fact. That such outrageous ignorance is now being spread in this country and elsewhere in Europe is beyond the pale.