Special relativity and speed of light miracle in Qur'an...debunked! 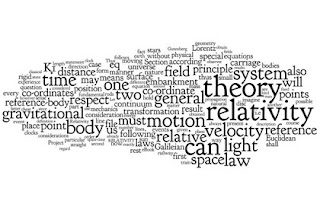 A reader of Rational Islam? has asked me to look at a surprisingly common miracle claim: that the speed of light is foretold in the Qur'an. "Varma", whose blog has the admirably succinct title, Debunking Bucailleism, and which I thoroughly recommend, referred me to this Islamic miracle seeker site, Miracles in the Qur'an and to this miracle claim in particular.
Here's the introduction:


We know from Einstein that my clock and your clock will not run at the same rate. Time (or rate of our clocks) depends on acceleration and/or gravity. If my clock accelerates and/or is in a strong gravitational field then it will run slower than your clock. So time is relative. Quran 22.47 compares time of Earth with time at Paradise/Hell (1 day vs 1000 years); while Quran 70.4 compares time on Earth with time in wormholes (1 day vs 50,000 years).


The angels and the Spirit ascend to Him in a day, the measure of which is fifty thousand years.

Now, call me an old nit-picker if you wish, but I don't spot any mention of worm-holes here. But perhaps I'm just being too literal ... expecting to read the phrase worm-hole when a claim is made that "the Qur'an compares time on earth with time in worm-holes".  Anyhow, let's see how the miracle claim continues. (Don't worry - it's not as bad as it looks!)

This time dilation (time difference) shows that angels indeed accelerate to relativistic speeds; outside gravitational fields this is the same speed calculated from the previous lunar verse also outside gravitational fields.We cannot calculate our local speed of light from this time dilation however we can calculate at what percentage of the speed of light those angels are traveling relative to an observer on Earth. By this we can compare a time dilation (50,000 years vs. one day) with a speed (12000 Lunar Orbits/Earth Day). We can do this by translating both of them to a common speed in km/sec. Outside gravitational fields 50,000 years vs. one day shows angels traveling at 12000 Lunar Orbits/Earth Day; it is the same speed in km/sec.

Oh boy! Where do we start? This all looks a bit daunting doesn't it? Isn't easier just to accept what we're being told and BELIEVE? That's exactly what the miracle seekers expect you to do...

I'll try to keep this simple.

In other words, the very large number we start with (which the miracle seeker in this case has taken from a random verse in the Qur'an) can be just about anything over 100 and you will arrive at the desired answer (depending on how close to 1 you want to get).

If you don't believe me, let's put a totally different set of numbers into the equation and see if we come up with... the speed of light!
Here's a verse from the Holy Book of Spinoza which describes how long a day is for my magic hamster:

So I am now claiming my magic hamster miraculously travels at very nearly the speed of light and therefore you must worship me!

Either the author of this miracle claim knows no maths whatsoever, or he (and I'd bet my house it's a he) is a  lying charlatan who knows full well what he's doing  - which is trying to mislead gullible, vulnerable people into believing Islam is rational and scientific.

What a despicable b*stard.

PS If you're a Muslim and still believe the speed of light is contained in the Qur'an do please get in touch.
Or failing that, you could try thinking for yourself.