Embryology in the Qur'an -"mudghah" or "chewed flesh"?

Here's the frontispiece of Hamza Tzortzis' (chief miracle seeker of the iERA, Islamic Education and research Academy) turgid study of embryology in the Qur'an. Notice the picture chosen to illustrate the study. Seem familiar? Of course it does...

...because it comes from the infamous illustration in Moore and Sheik al Zindani's text book, The Developing Human (3rd edition with Islamic Additions). The illustration appears in countless Islamic websites (and was copied in the first mail my convert friend sent to me to "explain" how miraculous the Qur'an was.) The picture is supposed to convince Muslims and putative converts that the verse 23:14 (“...Then of that leech-like structure, We made a chewed lump.”) predicts microscopic knowledge impossible for anyone in the 7th century Arabia to know. Notice how the somites (the segmental mass of mesoderm which look like the vertebrae) are particularly noticeable in the clinical illustration and which are equated with the chew marks on the picture of the piece of gum. 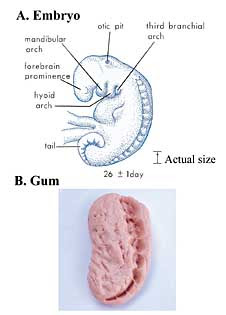 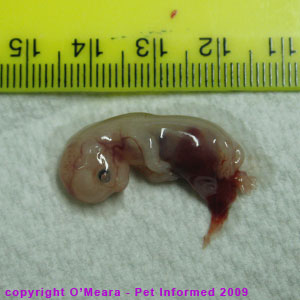 One is the embryo of a cat, one of a pig and one of a human.
Spot the difference? It's tricky because at this stage there really is none. (The zygotes and early embryos of mammals are virtually indistinguishable from each other until the organogenesis process begins and the embryo begins to assume its future characteristics. This is an awkward fact for those who believe that humans were specially created by God and that we don't share common ancestors.)

But where are the somites, those structures so evident in the clinical illustration beloved of the miracle seekers? Well they're there, of course, but they hardly look like the tooth marks in the piece of gum added by al-Zindani for the Islamic edition of Moore's text book, because they are internal structures.
In fact, the embryos look nothing like the chewed gum picture.
The phrase "chewed lump" is not miraculous; it is not even particularly apt; it is inaccurate. How ironic that the miracle seekers should have drawn our attention to a translation of a verse that suggests that the author of the Qur'an was a fallible human being.

Of course, the further irony is that, as the guys at embryologyinthequran.blogspot have so clearly and tellingly pointed out, the arabic word mudghah doesn't mean chewed flesh anyway.

The actual definition is that it is a noun for something that is intended or suitable for chewing (such as a small “piece of meat”).

Here's the definition from The Hans Wehr Dictionary:

Thus we have a lunatic (al-Zindani) - renowned for his bizarre pronouncements (cure for AIDS etc.) and for his dubious and desperate attempts to con/buy western scientific respectability for his weird ideas - spotting Moore's clinical illustration of a 28 day embryo and thinking that the somites looked vaguely like teeth marks.
He adds a picture of a piece of chewing gum and hey-presto! - A MIRACLE!

What he forgot/didn't realise is:
1. the embryo is approximately the same size as a grain of rice (4.5 mm!! - hardly a lump of flesh!)
2. the somites aren't nearly as visible as in the clinical illustration
3. that if they were visible at all, they'd be convex if anything, not concave like actual bite marks!
4. and that the word mudgah doesn't mean chewed lump anyway, but rather a lump/piece of meat of a size suitable for chewing


Those who choose to base their belief in God upon such dubious descriptions and inaccurate translations are fooling themselves, and their self-deception is aided and encouraged by idiots like Tzortzis and his acolytes at iERA who continue to spout this nonsense about tooth marks on the embryo.

PS I thoroughly recommend this site if you want to see further wonderful pictures of embryonic development.