The "Ark" discovered on Mount Judi - another miracle...

"Kevin" wrote to me some time ago suggesting that I might like to look into the apparent discovery of the remains of Noah's Ark on Mount Judi - just as was reported in the Qur'an -by someone called Ron Wyatt . He attached some photos and "radar scans" and presumably hoped that this at last would convince me of the divine nature of the Qur'an. 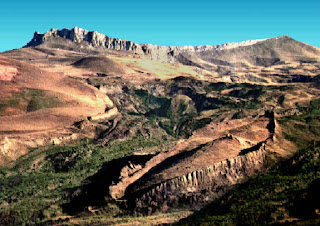 The pictures looked convincing (see above) but I always like to do my own checking and research. It didn't take long to discover that Wyatt had also "discovered" the Ark of the Covenant, the true Cross, and just about every other long-lost Judeo-Christian artefact. It was time for another mail...
"The aerial images are genuine in the sense that they are images of someting that really exists. I don't think they can lay claim to that epithet in any other sense of the word - please see below..(there is a plethora of articles all dismissing this site and the work of Wyatt. Please ask me if you still need convincing that the Ark search is a wild goose chase....at least for the moment!).
How many Muslims are labouring under the misapprehension that this "proves" the divinity of the Qur'an? How many Immams know (because they bothered to check...) but are happy to let their flock remain in ignorance? And the same could be said for so many of the apparent proofs of the Qur'an. Can you understand why I get so frustrated?


Has Noah's Ark Been Found? Part I
By Dr. David Merling

For a reliable summary of the early and numerous locations of Noah's ark see, Bailey, Lloyd R. Noah: The Person and the Story in History and Tradition, Columbia, South Carolina: University of South Carolina Press, 1989, pp. 61-115. For example, JabelJudi(Cudi Dagh),located near Mosul, was accepted by Jews, Christians and Muslims as the ark's landing place during the early Islamic period, p. 67.

Noorbergen, p. 128 and an aerial and two ground-level pictures of this site and a short article detailing the finding of this site and its subsequent investigation were reported in Life, September 5, 1960.

For an example of the general dismissal of the Durupinar site consider the cursory treatment given by Lloyd R. Bailey, Noah: The Personand theStory inHistory andTradition, University of South Carolina Press, 1989, p. 92, "The object in the aerial photos of 1959 has already been confirmed as a natural formation."

Formerly a professor at the SDA Theological Seminary and currently an associate director of the Biblical Research Institute of the General Conference.

"The Ark-shaped Formation in the Tendurek Mountains of Eastern Turkey," Creation Research Science Quarterly 3:1976, pp. 91. William Shea is one of the most creative and best published of Adventist scholars. He is well respected by both Adventist and non-Adventist scholars. To this day he believes that the question of the location of Noah's ark is unsettled. Due to the large number of queries the Institute of Archaeology has assembled a collection of letters and papers that speak to the question, "Is the Durupinar site Noah's Ark?" Those articles and letters quoted in this article, and noted with an *in these footnotes can be obtained in full by writing the Institute of Archaeology, Andrews University, Berrien Springs, MI 49104 and ask for the "Durupinar file." William Shea, "To Whom It May Concern,"* a letter, December 28, 1992, Merling, David, "Has Noah's Ark Been Found,"* a more fully documented copy of the two articles in this series.

Wyatt, Ron, Discovered: Noah's Ark, Nashville: World Bible Society, 1989. All page numbers in the text, not referenced to another source refer to this book.

David Fasold's book The Ark of Noah (New York: Wynwood Press, 1989) also claims the Durupinar site is Noah's ark. Fasold's book has circulated primarily among non-Adventist evangelicals, while Wyatt's influence has been with the Adventist audience. Fasold and Wyatt appear to be partners in an attempt to proclaim the Durupinar site as Noah's ark, but since Wyatt's claims have circulated primarily among SDAs I will evaluate his claims. I purchased my copy of Discovered: Noah's Ark at the local Adventist Book Center.

The statement by Wyatt, arguing for the Egyptian cubit, that Moses "would have been referring to the only cubit he knew" (p. 14), is simplistic and ill informed. We do not know what Moses knew, but we do know that the Near Eastern cultures were much more complex, and knew much more about each other than he supposes. There were trade relations throughout all of the ancient Near East. Are we to suppose that these nations traded with each other without knowing the common measurements of their trading partners? Moses may well have used the Egyptian cubit but arguments can be suggested for the other cubits as well.

Ibid., p. 18, "The rock types are rather exotic, but there is nothing present which must be attributed to human construction."

For convenience I am using the common term for these stones, but later in this discussion suggestions are made that dispute that these stones are anchors or replicas of anchors.

The 16,945 foot Agri Dagh is only 17 miles north of the Durupinar site (elevation c. 6,300 feet).
Dr. Terian, an Armenian by birth, teaches at the SDA Theological Seminary and is recognized as a world-class scholar in Armenian studies. Among his many honors, Dr. Terian has been invited several times to lecture and research in Russian Armenia.

Standing stones are not unusual in the Near East. For example, one of numerous examples would be the ten standing stones found during the excavations of R.A.S. Macalister at Tell Gezer. The Excavation of Gezer. Vol. II, London: John Murray, 1912, pp. 385-396.

This is a better geographical term for the area around the Durupinar site.
Snellng, ibid., p. 33.
Posted by Spinoza at 10:42 AM