The Seven Heavens - The Universe according to the Qur'an Pt 1

Seeing as we seem to be taking a break from my correspondence with "Kevin", I thought we'd continue the astronomical theme and look at some more claims of miraculous knowledge regarding the Earth's place in the Universe.
One of the pictures I chose to decorate the sidebar of Rational Islam is a pictorial representation of a common view of the cosmos held by ancient peoples. I'll reproduce it here so you can study it at your leisure... 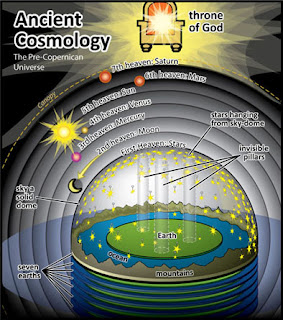 Now let's look at some verses in the Qur'an that describe the Earth's place in the cosmos and how the solar system fuctions...

And He completed them seven heavens in two days
and inspired in each heaven its command;
and We adorned the lower heaven with lamps,
and rendered it guarded... (41:12)

Do you not see how God has created the seven heavens
one above the other,
and made the moon a light in their midst,
and made the sun as a lamp? (71:15-16)

PLATE VII. B. Construction of the Akkadian, Chaldean and Babylonian Universe.
(From Qaballah; Isaac Myer, 1888)

There is, as you can see, a remarkable similarity between the ancient Babylonian view of the universe and that described in the Qur'an...


"1. In the Babylonian conception of the universe the
earth occupied the central place. It was the accepted centre of their planetary system.
2. The northern half of the earth was called the upper, associated with life and light. The southern half was called the under, associated with darkness and death. The South and the Underworld are identical.
3. The upper or northern half of the earth was regarded as consisting of seven stages (tupukati), ranged one above the other in the form of a staged pyramid. The staged Temple of Nippur, according to Sayce, was a model of the Earth according to the belief of those who built it.
4. Correspondingly, the antarctic or under half of the Earth was supposed to consist of seven similar stages. The seven tupukati of the underworld are a facsimile of the seven tupukati of the over world." The Book of Earths - The Babylonian Universe (p60) (available at http://www.sacred-texts.com/earth/boe/boe10.htm)

So how do Islamic apologists explain this apparent copying of the geocentric view of the heavens which was so prevalent in Mohammad's time? Let's see what http://www.understanding-islam.com/ has to say...:


"The reference to the fact that God has created seven heavens [...] refers to the vastness of His creation. It says that God has not just created one sky -- i.e., one universe, but seven such skies -- or seven universes."

Yes, of course it does...obvious isn't it?

Just a reminder: if you fail to believe that the Qur'an has a divine origin because you are troubled by such things as the apparent illogicality of the stars being in the lower heaven with the moon,  then Allah promises to burn your skin off you for eternity...so merciful is He.